Haven for the living Princess and the Pea

“No one bites back as hard on their anger. None of my pain and woe can show through.” Limp Bizkit, “Behind Blue Eyes”

For years I’ve been preoccupied with all the external threats to my health, but days like the ones I’ve just had remind me that I can cause enormous damage to myself from the way I deal with my emotions. I want to talk about my new favourite word, a word I discovered while reading a very old and musty psychology book called “The Borderline Syndrome” by Grinker and colleagues. This word is “implosion”, which takes me back to high school Geography class when we learnt about subduction, the way tectonic plates collide and one ends up sliding under the other and into the earth, instead of outwards. The word is used in the context of describing the different types which fall under a psychiatric diagnosis called borderline (which HSPs tend to be prone to, especially those who have traumatic childhoods):

“Thus, in hysteria and impulse disorders there is an “explosion of affect” before integration can occur. Internalization or “implosion” of affect disorganises congnition, keeps informational data inside, contains affect and binds syntax as in obsessives and depressives. From this point of view the borderline extends over the continuum in that some groups “explode” whereas others “implode” [e.g. the “Quiet” Borderline, a subtype tumblr user Casey writes about here].”

I searched “implosion” in Google to get a better feel for what it is to implode. The definition that came up is “an instance of something collapsing violently inwards”. I like this definition, especially the word “violently” which captures the intensity of the experience. Whether you “implode” or “explode”, the result is still the same: destruction, whether that’s of things around you, or your own mind and body from keeping it all in.

What exactly are some of the impacts of imploding? As somebody who tends to “implode” rather than “explode”, I will share with you some things “imploders” go through.

We have an intense sense of loneliness and separation from those around us because no one can see how hurt we are. During my most recent episode of implosion, I remained curled up on my bed in agony while the rest of my family was oblivious to the state I was in. I was extremely upset but I couldn’t cry properly, so I never got a proper release. I was aware of an enormous fire burning within, an inner rage which remained trapped inside. Occasionally it came to the surface and I would go to throw something, but something within me stopped me. As Casey writes in her article, on the the surface it can look like people who implode are more functional and “together” than those who explode and act out their pain. However Casey has come to the conclusion that the “imploders” she met were suffering even more than she, as someone who explodes, was, as they were unable to express or share their suffering. With this comes not only a painful sense of loneliness but a distressing sense of helplessness.

As Casey writes, many of us feel a very deep, often desperate, depression. “At the root of so much of BPD, is anger and rage because it is anger and rage that are summoned to protect against the pain,” Casey explains. “If one is not acting out that anger and rage (classic borderline presentation) then one is more likely to have an even more severe depression since, essentially, depression is anger turned inward.”

As Rachael, a quiet borderline, writes, “The rage that is directed outward is incredibly powerful and can almost knock you down. That same rage in me is directed inwards.” There is an enormous amount of energy which isn’t finding an outlet and instead it is left to attack the body. For me the first thing I often notice is a splitting headache which spreads down to my jaw. Implosion has a very toxic effect on the body and afterwards the body goes into de-toxification mode. After my recent episode, I wasn’t able to sleep. I was up in the night feeling like I was going to vomit. I have had diarrhoea and the physical effects have lasted for several days. In the long term, implosion can even increase your risk of cancer. When I was studying psychology I remember learning about a personality type called “Type C” which was linked with higher rates of cancer. As one source I found defines it, Type C is “A psychological disposition whereby an individual seems quiet and thoughtful, but is in fact frustrated and angry. A person with a typical type C personality appears to lack emotions, does not usually assert themselves and wants to pacify others.”

The best thing you can do for yourself is to get it all out somehow. Communicate. I feel really bad for the terrible self-harm I’ve inflicted upon myself lately by imploding, and am making it my goal to stop worrying about what other people think and let my emotions run more freely. When you’re on your death bed afterall I’m sure the last thing concerning you would be what other people are thinking of you. 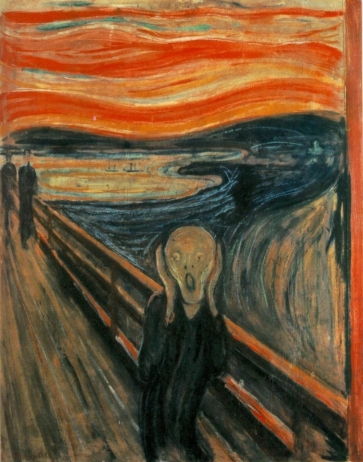 A founder of hsphaven, Zoe hopes to create a space for HSP writers to come together and share their diverse passions and expertise through writing. This has been an important outlet for Zoe over the years; she fondly recalls writing stories as a child at recess and lunchtime and sharing them with her classmates. Some of Zoe’s areas of interest include mental health, healing and self-development. She has a background in psychology/social science. In her spare time Zoe enjoys being in Nature, op shopping, vegan food, music, and art and craft.

"Clouds come floating into my life, no longer carrying rain or to usher storms, but to add colour to my sunset sky." ~ Rabindranath Tagore